On the couch in the living room 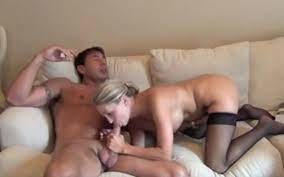 It was Friday. My friend had been dry for several weeks because she was very busy at work. But now she finally had time. She had put on a beautiful blouse and a short skirt especially for this moment and of course heels. I had quickly scored food from the Mac and now we were sitting together on the couch eating from the Mac. She spontaneously kissed me on the cheek and immediately afterwards again. “Glad you're back here,” she said in a soft voice. I got horny when she lay against me like that. I felt her one breast against the side of my rib cage and lowered my hand so it was on her hip. There was little light in the dim room, so there was an intimate atmosphere. My girlfriend sat down a little differently and moved even closer to me. I put my hand on her ass crack. So we sat for a while. “It's been so long,” she said suddenly. “So long ago,” she repeated softly, running her hand over my fly.

I started squeezing her bottom gently. “Mmmmhhhhmmm”, she sighed and shifted her body so that I could get even better at her ass. I now rubbed it all over and pulled up the bottom of her skirt, which had already moved up quite a bit due to her posture. “Yeaahhhh, get me there,” she said in a muffled voice. She went ahead and opened the belt on my jeans and pulled down the zipper on my fly. Meanwhile, I raised her skirt until it was almost around her waist. This allowed me to get my hand into her panties from above. My searching fingers went down her ass crack and suddenly rubbed her anus. “Yaaaaahhhhhhh nice!!!!! Ohhh”, she moaned and tried to pull my pants and slip off my ass herself. Helpfully, I lifted my bum off the couch. “Wow, it looks like you've grown a bit”, she said a bit surprised and blew her hot breath over my purple head. Then she jumped up because I had put my index finger in her asshole and gently pulled me back and forth. Her sparkler felt tight but velvety. “Ohhhh yeah, I'm so hot, so horny! Finger my pussy later, will you?” she asked lying and grabbed the trunk of my stiff cock. She voluntarily started to masturbate the big pole.

Meanwhile I unbuttoned her blouse. She willingly allowed me to take off her blouse, greedily stick my nose into the crevice of her breasts, and twirl her lower body in such a way that I pulled skirt and panties off her body in one go. Her pussy was like a magnet because immediately the same hand went straight to that bald center of intimacy, her wet pussy. With my other hand I tried to pull down her bra because I craved her tits. I was over the moon. But she too was horny and enjoyed my thumb in her wet pussy. I grabbed one of the two whoppers and brought her hard nipple to my mouth. I sucked at the nipples alternately and fingered her vigorously with my thumb. Suddenly I remembered that earlier today she loved to receive a finger up her ass too and promptly stuck my index finger in two phalanges there. “AAAHHHHHH,” my friend moaned and began to move her hips violently. She pulled my head off her tits and lifted it to hers. She stuck out her tongue and licked my whole face; renewed childhood love, coupled with an untold horniness, that was it. With my free hand I found her right nipple and stroked it. She now felt two fingers in her wet pussy and two in her tight ass. This double fingering made her wild and then I started licking her left ear as well. “YESSSSSSSSSS,” she screamed. “Now you,” she gasped, completely captivated by me. “Now you, fuck me!!!! fuck your first wife of your life!!!!!!!!! That's me!!!!!! FUCK ME!!!!!!!!!!!!!!!” She frantically helped me take off my shirt as I dragged my pants and briefs off my ass. I threw myself on her body and grabbed my girlfriend for my rock hard cock to lead me into her wide-open slit. Her supple labia were swollen waiting for my cockhead to penetrate the yearning pussy with a mighty thrust. Like a horny bear I started fucking violently and pounded my cock back and forth in that delicious pussy. My girlfriend wanted to let me fuck a little more slowly so that she could enjoy it longer but I was almost unstoppable. I was like an unstoppable locomotive. I folded her up, put her feet against the backrest and got hold of her tits again, squeezing her nipples gently and fucking on and on. My girlfriend went along with my pace; she pounded back and drove her nails into my back; then she grabbed my buttocks tight to let me thrust even deeper into her. I had been fucking her like this for fifteen minutes and increased the tempo again because I felt my cum coming.

I put a hand on each buttock and pulled the buttocks apart. With my nose I was almost in the semen that had leaked into her buttocks. I greedily worked on her pussy and enjoyed the view of her buttocks and her star. Slowly I shifted my working area. My kisses now went softly from the hot empty pussy to the buttocks. With tender long strokes I licked my girlfriend's buttocks with my tongue. I enjoy and she enjoyed even more. My tongue went back and forth and each time I touched her little star. And then there was the moment. I pulled the buttocks further apart and touched her ass with the tip of my tongue. Her breath caught as she felt my tongue shoot in. Slowly but very intimately I start to tongue her ass. Deeper and deeper she felt my face between her buttocks and knew that my tongue, wet with semen, slid in even deeper. Slowly she moved along and felt great every time that tongue left and reentered her ass. My French kiss on her sparkler was full of love and passion. Slowly she felt my right hand slide in and the tongue was replaced by the thumb. Slowly that thumb started fingering her ass. I sat up behind her and suddenly she felt what she was counting on. The glans against her labia. I could never resist her ass. If my dick went limp, all she had to do was get me to lick her ass and she would know my dick would be standing four more. “Fuck me, fuck me with one more time. 3GB!!!”. Her fucking rod slid like a knife through butter in her warm, wet pussy until I couldn't go any further.