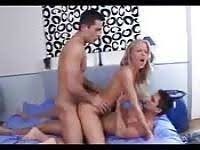 I grew up in a normal fairly middle-class family with two older brothers, Max (20) and Jeroen (24), I am the youngest and only girl of 20 years old and my name is Christina. My brothers have been dating for a few years now, Jeroen will be the first to get married next year and is busy renovating his house for this. I had sex last night with my brothers, something I never thought possible but which suddenly happened at our house now that our parents are away for a week on holiday to Turkey. I had dinner with my youngest brother Max, Jeroen went to work for a few hours after work in his house and came home around 8.30 pm. When he saw me and Max lying in bed in my bedroom, he wanted to join in too.

Max was on the couch watching TV after dinner and I said I was going to take a shower. I was just in the shower washing my hair when he suddenly entered our bathroom, what could you do I asked him, I want to take a normal shower Max. He just stood there and looked at me, your tits are growing nicely, he laughed, he saw that I was shaved and even bent a little in front of the shower cubicle to get a better look at my bald pussy. Act normal, I yelled, go away and do that with Mirjam, that's his girl. I got shampoo in my eyes because I tried to cover my pussy with my hand, it stung my eyes and I yelled again, fuck off Max. He didn't listen, told me not to be so prudish and that he was in the shower too. I had my eyes closed at that time because that shampoo sting my eyes unwise.

We were both super horny, he was fucking at a nice pace that I could keep up with. I was completely shocked when suddenly my room door opened, what the hell are you doing… our eldest brother Jeroen shouted. Max was also shocked, he immediately lay still on top of me, but his cock was still completely in it. You don't do that when I'm not there, he laughed, it looks like our little sister is growing up, it's nice slut he laughed. Jeroen saw of course that Max's cock was still completely in my pussy, I myself felt him become a bit weaker. I'm in Jeroen said, I'll just fly into the shower and then we'll fuck our horny sister just the two of us. Max he said. I thought when he went to take a shower, do I have something to say about that myself? No, because even though Max had left me, we both lay in my bed waiting to see what would happen next. Jeroen showered very quickly, he came into my room naked and said that we were going to our parents' bedroom, there we have the space and you get this boy. Pointing at his erect cock where no pubic hair was visible, I had to give him a kiss on his fat head.

I soon realized that my brothers knew exactly how to do it, they had much more experience than I did and made me crazier all the time. Jeroen suddenly sat on top of my face, I had to lick under his big balls and he said about his star, he himself started to pull his dick quickly. I couldn't get enough oxygen in when I started to cum from the licking and banging that Max was doing to me. Now I know a bit what is meant by strangulation sex, you come with little oxygen and that gives you a tight and anxious feeling, making your orgasm very heavy. Fortunately Jeroen immediately went off my face with his heavy lower body, he understood that I needed oxygen at that moment. What I also really liked was that Max and Jeroen had no problem with each other's physical nudity, they sat on both sides of my body and started jerking themselves off above me. I also thought that was insanely horny to see, two of those big strong guys who showed me well that they also liked me. Jeroen was the first to come between my legs and push his circumcised cock into my wet pre-licked pussy.

It got harder and harder then, Jeroen kept looking at me and squeezed my nipples hard, Max fucked me so hard that I got the feeling that he wanted to fuck my all over Jeroen's body. Screaming and shaking my head vigorously, I came so horny again, my nipples were almost ripped off, but I loved it all. My youngest brother yelled that I almost squeezed his cock off with my sparkler during my orgasm, that's how it felt to me too. But I also felt that there was space and relaxation of my sphincter, almost at the same time I heard Max panting heavily and I felt warm jets of sperm coming over my heated back.

He pushed me away, suddenly both Max and Jeroen were sitting next to my head on the bed, both smeared their wet cock with a horny odor over my face. I went crazy watching their cocks come together and over each other and tried to put them in my mouth together. Both I could have a piece in my mouth and totally excited sucked on their acorns that were pressed together in my mouth for minutes. When they withdrew I finally got some peace and couldn't utter a boo or yuck, I was completely fucked by my brothers and (now 12 hours later) still feel all my muscles in my pussy, ass and body. It's been crazy and I'm pretty sure it won't stop with this one time I've had sex with my burps.